I had been introduced to shamanic journeying a few years before arriving at Duke in 1993, but my most memorable journey occurred a year later following the deaths of my father David Lawrence Burk and my friend George Phillips, Jr., MD, as excerpted below. It was preceded by a terrifying dream of being in a medieval hall of horrors and then the unexpected appearance of a jaguar power animal in a meditation. On a subsequent journey I also encountered a buffalo as a power animal which led me to explore the Duke Tobacco Legacy described by Mary Duke Biddle Trent Semans in her linked article The Foundation and Heritage of Duke University and possible connections to the Native American legend of the White Buffalo Calf Woman. These stories and the shamanic roots of the Duke Center for Integrative Medicine are detailed in Chapter 6 of Let Magic Happen: Adventures in Healing with a Holistic Radiologist. The technique for journeying is described in the February 2013 Let Magic Happen blog, JOURNEYING with the Drum.

Drumming Up the Spirits excerpt: I found the drumming tape at the local New Age bookstore, where I also bought The Way of the Shaman by anthropologist Michael Harner,  who happened to have made the tape as well. I read the first chapter of the book, which described the shaman’s concepts of ordinary reality and non-ordinary reality. Harner had created the foundation to promote what he calls Core Shamanism. This is a generic approach focused on drumming rather than psychedelic plants.
That evening, I put the tape on, put my headphones on, and off I went to the lower world. For my portal of entry, I again chose the crawl space under my old house in Norfolk. Passing through the dark, twisting tunnel, I came out in a verdant landscape. There sat the jaguar, waiting for me. Yes, he was my power animal. I climbed on his back for a ride, and we journeyed to the drum beat far into the jungle toward a waterfall with a cave hidden behind it.
We passed through the waterfall to find two figures sitting in the cave. The first was my dad, who simply said to me, “Trust your instincts.” It sounded like good advice. He also suggested that I talk to the other person in the cave. It was George, of course, and he said, “Larry, you’re trying too hard.” I realized it was time to let go of obsessing over the lecture. I thanked them both for the advice and went back to the portal with the jaguar, arriving back in my crawl space just as the half-hour drumming tape ended. I turned off the tape and immediately began to ponder the meaning of the journey.

Image of the Month from Chapter 6 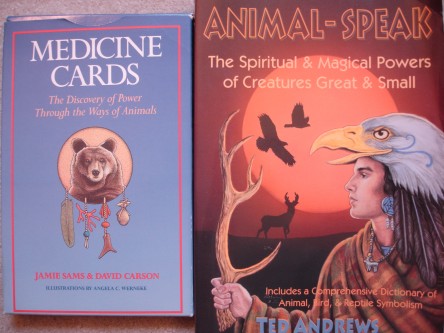 Useful Power Animal References
Following those journeys in 1995, I seem to have attracted buffaloes and jaguars into my life on a regular basis. I became more intrigued by the spiritual symbolism of animals when I discovered the Medicine Cards and the Animal-Speak and Animal-Wise books, which teach that each animal has a specific medicine teaching associated with it.
The Medicine Cards teaching with regard to Jaguar is about integrity and impeccability: “Its mission is to devour the unclean aspects of human behavior.”  Having Jaguar show up as I was launching my integrative medicine career at Duke was an interesting synchronicity. The teaching associated with Buffalo is about prayer and abundance: “The medicine of Buffalo is prayer, gratitude and praise for that which has been received.”