Since publication of my breast cancer warning dreams research in May 2015 I’ve received numerous reports of warning dreams for a large variety of cancers including brain, skin, lung, and uterine among others. Colon cancer is the second leading cause of death from cancer and the subject of extensive screening efforts, so it makes sense that dreams may play a possible role in early detection. Thus far I am aware of three warning stories which are described below. I suspect there will be many more examples, and that another dream research project may emerge in the next few years. In the meantime, please start keeping a dream diary as recommended in my recent 2016 TEDxRaleigh talk on Cancer Warning Dreams that Can Save Your Life featured in the July 2016 Let Magic Happen blog.

Colon Cancer Dream Reports:
Breast cancer dreamer Wanda Burch surveyed a New York breast cancer support group in 2004 and found that 10/19 women remembered having warning dreams. One of the women also reported a dream that predicted her colon cancer as well. Shortly after my breast cancer paper was published an old high school classmate who I hadn’t seen in 40 years contacted me with a story about colon cancer from 13 years ago whose dream image is featured below.

Just a month ago, I heard an even more cautionary tale from Aisha Umar who is still undergoing therapy, so please send her your prayers for healing dreams:
“I started having some anxiety issues - and when I was 40, I went through a year of severe depression.  It was just prior to this depression (and during it) that I experienced non-stop dreams and visions (while I was awake) of feces.  There was no blood in the stool - but I kept seeing piles of my feces in inappropriate places.  It was so consuming I couldn’t stop thinking about it (and I didn’t share it with anyone because it sounded ludicrous).  I was raised a Muslim - and I kept seeing my feces on the Quran (which would really upset me and I’d plead with God to make me stop having this vision).  Anyway, it was constantly in my mind - I would be having this vision of feces on my desk, on religious books, being thrown at me .... while I was having meetings at work, sitting with my daughter, sleeping.  To the point where I was in tears and could not distract myself from having this vision.  Eventually it went away. At 45, I was diagnosed with stage 4 colon cancer.” 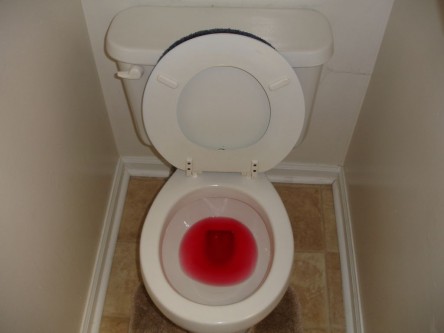 Blood in Toilet
Recurring dreams about entering a stark white bathroom and looking into a commode which was filled with bright red blood.
“I had a colonoscopy as I was nearing the age when this test is recommended.I had a tumor the size of a pea, had a resection of my colon, and nine lymph nodes were removed. Of the nine, two nodes were compromised with cancer cells. Stage 3 colon cancer.”