I learned Anodyne Imagery from radiology tech-turned hypnotherapist Donna Hamilton on her first visit to the Duke Radiology Department in 1995. During the next two years she trained 50 staff at Duke Medical Center including nurses, techs and physicians. The trainings included rapport skills, relaxation techniques and imagery derived from neurolinguistic programming (NLP), a spin-off of hypnosis. The staff learned how to teach patients ways to cope with pain and anxiety without medication. These benefits were documented in the linked article by Donna and radiologist Elvira Lang, Anodyne Imagery: An Alternative to IV Sedation in Interventional Radiology. Case reports from MRI tech Ann Charles and radiologist Chuck Spritzer are excerpted below from Chapter 7 in Let Magic Happen: Adventures in Healing with a Holistic Radiologist. You can learn some of the basic skills for yourself by watching the short video in the March 2013 Let Magic Happen blog, ESCAPING from Stress with Anodyne Imagery.

Anodyne Means No Pain excerpt: Another of Ann’s MRI patients was a skeptical physics professor with severe shoulder pain. Like the previous patient, he could not lie down comfortably in the magnet. He really wasn’t interested in any “California woo-woo stuff,” he said, but he was highly motivated to find out what was wrong with his shoulder. Ann realized she needed a more technical approach to gain rapport with his analytical mindset, so she asked him to imagine holding manually operated digital pain and anxiety meters in his hands. She got him to dial down the meter readings, first one side, then the other, until he was able to reduce them enough to complete the scan.

I had a non-English-speaking, Hispanic patient, who came for an ankle arthrogram (a procedure requiring a potentially painful injection). He had severe reflex sympathetic dystrophy, a painful syndrome that makes the lightest touch to the skin intolerable. An ankle arthrogram was challenging enough without this extra dimension of difficulty, so I asked the interpreter to find out where the patient would rather be instead of on the X-ray table having this procedure. The patient enthusiastically said he would rather be at his favorite restaurant eating a sumptuous dinner. He imagined eating a five-course meal while I put a big needle into his ankle, injected iodine contrast, and took films. He was very comfortable without any mention of pain whatsoever.

Considering our lack of background in Donna’s approach, our results with patients were quite remarkable. Chuck Spritzer, who also took the training, found it to be particularly useful in dealing with claustrophobic patients. When Ann wasn’t available, the other techs called him to assist with their patients. This ability was particularly helpful when the patients didn’t realize they had claustrophobia until they actually saw the small bore of the magnet tunnel. With such cases, no preparation for Valium sedation could be made in advance. The patients were particularly pleased to be empowered to handle their fears without drugs and to be able to drive home afterward without waiting a long time for the Valium to wear off.

Image of the Month from Chapter 7 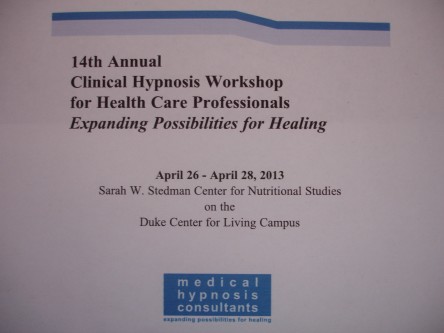 My own imagery work evolved into formal hypnosis training with counseling educator and therapist Holly Forester-Miller, from Medical Hypnosis Consultants. Holly, who is director and coordinator for an annual weekend workshop approved by the American Society of Clinical Hypnosis (ASCH), routinely brings in talented faculty from around the country to assist her in teaching. Much to my surprise, the faculty included one of my old medical school professors, Charles Srodes, whom I knew only as a compassionate oncologist, not a hypnotherapist. Completing the basic and intermediate workshops allowed me to take the required consultation hours with Holly to qualify for my ASCH certification in 2011. We are fortunate to have the workshop here every April as described in the linked brochure.