I’ve been keeping dreams diaries on a regular basis since 1987.  On two occasions I’ve had precognitive dreams that corresponded to the diagnosis of cancer in someone else. Until I met Pali Delevitt in 1999, I had never heard of anyone diagnosing their own cancer in a dream as described in the excerpt below from Chapter 9 of Let Magic Happen: Adventures in Healing with a Holistic Radiologist. Since then I’ve discovered two other friends who diagnosed their own breast cancers in dreams and have met clinicians who routinely use dreams for diagnostic guidance in their practices. I moderated a panel discussion on the topic at the 2012 Parapsychological Association meeting as described in the linked abstract, Medical Dream Diagnosis. To learn my favorite approach to dreams see the May 2013 Let Magic Happen blog, Interpreting Dreams in Multiple Dimensions.

Healing Dream Guidance excerpt:
In her book, Wyld Possibilities, she described how in 1987 she had a suspicious lesion on her tongue biopsied. It came back negative. Soon afterward, she had a dream of a spider crawling out of her mouth through a mass of cobwebs. Then two characters from the M*A*S*H television show, Charles Emerson Winchester and Hot Lips Houlihan, showed up in a dream. They told her (several times) she had a tumor in her tongue that needed to come out, despite the initial negative biopsy. A repeat biopsy by her skeptical surgeon eventually confirmed the cancer.

After surgery and radiation left her temporarily cancer-free, she had additional dreams in 1991 of a spider escaping from a cage. This was a warning of the first recurrence of her cancer. Shortly after we met, she had another recurrence. It was recommended that she have half her jaw removed for reconstructive surgery, but instead she chose to manage the condition through less radical laser surgery and holistic remedies. She was guided by her dreams until her death ten years later, outliving her prognosis by a couple decades. Pali used her voice during those years to teach many students. She also fulfilled her lifelong dream of writing and producing Esther, her biblical musical masterpiece featuring 20 of her original songs.

Naturally, it was Pali who recommended Marc Ian Barasch’s Healing Dreams to me when it first came out in 2000. He reported a similar experience in diagnosing his own occult thyroid cancer in the book. He was confronted by recurring ominous dreams filled with images of death. They always focused on his neck. Finally, after an initial negative workup, he had a terrifying dream that “torturers had hung an iron pot filled with red-hot coals beneath [his] chin,” that drove him to push his doctors to find the cancer. As documented in his book, such dream diagnoses are more common than you might think.

Image of the Month from Chapter 9 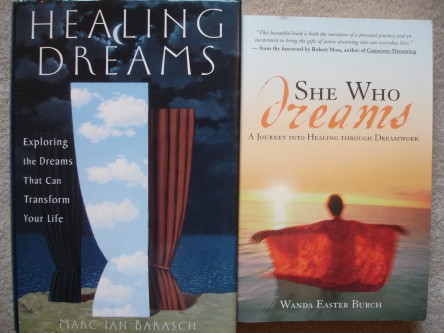 Dream Books
Marc Ian Barasch surveys the entire literature on dreams and healing including scientific experiments and case reports, and Wanda Easter Burch provides an amazingly detailed personal case report of her journey with breast cancer diagnosis and healing. Author Larry Dossey, MD: “This book sets a new standard in the field of dreams. Barasch compellingly shows how dreams can heal, and provides us with greater wisdom. He also rights like a dream, which makes this book an uncommon joy.” Oncologist John Jaski, MD: “She Who Dreams is a fascinating story of a woman’s ability to harness psychic energy through dreams and convert it into healing powers.”