What if your most troubling symptom is an invitation to go on a healing adventure? Is your body attempting to get a message to your conscious mind by expressing a deeper understanding from your soul that something is out of balance in your life? You could attempt to suppress it with drugs, although that would only be shooting the messenger with potential collateral damage due to a multitude of side effects. Radiologic imaging may show a mechanical abnormality potentially fixable by surgery, but there is no guarantee that an operation will relieve the symptom if the rest of your life is still out of alignment. What if there is an emotional psychospiritual component to your illness that can be addressed by simple, safe, and inexpensive mind-body-spirit self-healing techniques? If so, it might be valuable to go on a quest to explore the mysterious story your body is telling you.

My understanding of symptoms as metaphors began with my father’s cancer as described in Chapter 3 of Let Magic Happen: Adventures in Healing with a Holistic Radiologist. Since then I have experienced many other instances in my own life which I describe in more detail in the November Let Magic Happen blog, EXPLORING the Meaning of Your Illness. I have found Louis Hay’s Heal Your Body book pictured below to be surprisingly helpful in this regard. The concept is discussed academically in the linked paper, Symbolic Diseases and “MindBody” Co-emergence. A Challenge for Psychoneuroimmunology.

Here is the related excerpt from Cancer as an Initiation: I remember him saying repeatedly that he was “building up a crudball of frustration” inside him. As he said those words, he always pointed to his abdomen near the site of the actual tumor. My recognition of this possible emotional connection to the development of Dad’s tumor fit well with the general message of Bernie Siegel’s book. Dad had reached a promotion plateau in his job. He had been passed over for vice president a few years earlier and had been keeping a “bullshit file” on his computer, where he recorded his anger at how his inventions and patents had not been properly rewarded. Christine remembers thinking he was so “pissed off” it was no surprise that the tumor originated in his kidney.

Image of the Month from Chapter 3 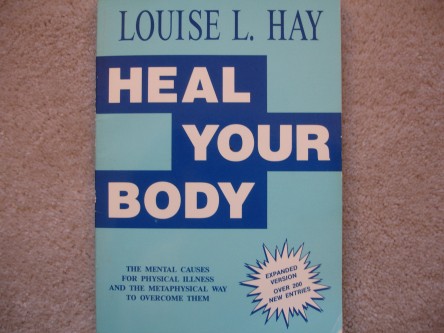 Heal Your Body: The Mental Causes for Physical Diseases and the Metaphysical Way to Overcome Them
Louise Hay’s famous little blue book is a list of health problems, probable emotional causes, and new thought patterns presented as affirmations.  My initial reaction to the book was that it was way too simplistic with its gross generalizations for an encyclopedic list of every symptom known to man. However, when I looked up kidney problems, I found, “Criticism, disappointment, failure.”  For cancer, Hay listed, “Deep hurt. Longstanding resentment. Deep secret or grief eating away at the self. Carrying hatreds.”  It all seemed like a rather accurate fit for Dad’s situation.