Medical intuitive Winter Robinson and I will be leading our second introductory weekend workshop on Medical Intuition and Symbolic Diseases: Experiential Learning and Practical Applications.  The first one in December was sold out in the first few weeks of registration. It will be held at The Monroe Institute (TMI) in Faber, VA, Friday evening to late Sunday afternoon, 5/22-24/2015, with registration limited to 20 people due to the special facilities required for Enhancing Intuition with Hemi-Sync Technology as described in the February 2015 Let Magic Happen blog. The first scientific research documenting the effect of the binaural beats used in Hemi-Sync was performed at Duke University by Jim Lane, PhD, who is now TMI research director.  Each participant will be assigned to their own CHEC Unit complete with stereo headphones to perform the experiential intuition exercises during the weekend as described below in the excerpt from Chapter 10 of Let Magic Happen: Adventures in Healing with a Holistic Radiologist. Winter teaches a simple approach to Diagnosing Intuitively from a Distance that serves as an easy introduction to Intuitive Medical Diagnosis. There will also be discussion of dream interpretation, Chinese five element theory, symbolic diseases, and symptoms as metaphors.

The other favorite class session of the semester featured the Hemi-Sync tapes my former student Stefan Kasian helped us get for the course. Stefan, always ahead of his time, had spent the summer of 1994 as a research assistant at the Monroe Institute. That happened to be the year before Bob Monroe, the visionary author of Journeys Out of the Body,  made his final journey to the other side. I had found this book at The Garland of Letters years before. It was filled with intriguing tales of how this radio broadcasting executive came to produce audio technology that would create altered states of consciousness.

Stefan later did research at Duke on Hemi-Sync with psychophysiologist Jim Lane. They verified that the binaural frequencies actually produced effects on the ability of student research subjects to perform a vigilance task, with beta frequencies yielding more accurate responses than theta or delta frequencies.  Courtesy of Stefan, the Monroe Institute gave us free tapes and, later, CD’s for all the students in the class. The Hemi-Sync technology spread virally across campus, especially the ones that claimed to enhance productivity as documented in the study.

In class, we set up stereo speakers on opposite sides of the wrestling room and instructed the students to lie down on the mats in between. Bob Monroe’s disembodied voice then came booming out of the speakers: I am more than my physical body. Because I am more than physical matter, I can perceive that which is greater than the physical world. (The effects would be more powerful, of course, when heard through stereo headphones as used at the Monroe Institute.) We were then instructed to place all our cares and worries in an “Energy Conversion Box.” The relaxing sounds of simulated ocean surf with the Hemi-Sync frequencies came from the speakers as we did this. The next step was “Resonant Tuning,” done by using vocal toning to stimulate energy flow through the body. The process lasted about an hour as we incorporated PMR, breathing and visualization exercises into the mix. None of the students had any out-of-body experiences as far as I know, but I think it is safe to say that their consciousness was expanded. 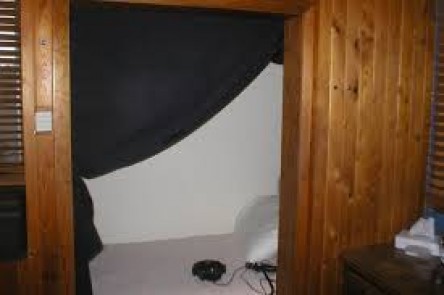 Hemi-Sync binaural beat technology is listened to via headphones in these individual chambers that allow participants to focus inwardly on their intuitive processes. Winter Robinson’s soothing voice guides the imagery exercises designed to produce an altered state of consciousness and enhance right-brain functioning. She was one of the original trainers working with Bob Monroe several decades ago in the early days of TMI.